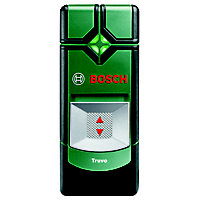 Simple to use and capable

For a DIY user, I would recommend. Saved me money for sure

Waste of time and money

This product is absolutely awful. Will erratically detect that the whole wall is unsafe one second and then detect nothing the next. I made the mistake of trusting its judgement and drilled through a water pipe. Do not purchase this...

Does exactly what I bought it for

Does the job I wanted it for in identifying cables and pipes to put up shelves and hang pictures. Easy to use to

Not happy with it

Bought this the other day to do some work on a studded wall to find cables and studs .
A peace of straw would of been more useful.
Took it straight back next day ..
No English instructions
And as for detecting something ,, well ,,

Kind of worked, but then didn't.

I bought this product yesterday evening, less than 24 hours later I am ready to return it.

I wanted this to detect pipes and electrics in the wall behind an electric shower and it almost worked, in as much as detecting metal of some form in the whole wall 1 foot either side of the shower, but not detecting electrics.
I thought "okay, this may just be the electrics are buried deep, I can just drill the other half of the wall and avoid the shower area completely.

This morning, I set up my drill and thought I would double-check the wall area was safe, but now find the detector saying there are live-wires EVERYWHERE.
I am part way through building a wooden shelf, and the detector thought there were wires within the timber frame of the shelf I had built, as well as the bathroom door.

Manual callibration, if successful (and this seems hit-and-miss) only had the effect of making it beep constantly whenever switched on.

I would avoid not recommend this to other people.