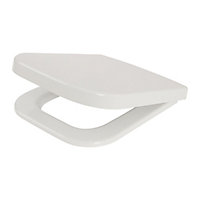 This Cooke & Lewis Santoro white toilet seat features a soft close function, meaning that it will close slowly and quietly when put down. The seat is made from plastic.

It's not good at all, no follow up spare. Plus this system does not allow short comments

So you don't expect to have to replace parts after a year. The hinghes that go into the toilet have warped and bent causing the soft close mechanism to break.

Listen to the reviews and don’t buy this!

girl with a screwdriver - 3 month ago

I was somewhat forced to buy this seat as it fit the shape of our toilet and the previous seat has cracked. After 6 months the screws had come so loose that the seat moved around everywhere, and the soft close stopped working. In order to tighten the screws, the protective metal has to be removed from the plastic fitting, but this was literally impossible to remove as it was jammed on so tight, so we managed to unscrew the entire thing which resulted in the raw plugs falling into an inaccessible void, so we now can’t tighten the screws in anyway. Nightmare, wish I’d listened to the reviews - do your self a favour and don’t make the same mistake!

Broke after a couple of months. Nearly £40 to replace.Don't buy this toilet.