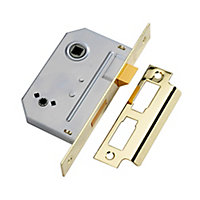 This 2 lever deadlock is ideal for internal use with wooden doors. Suitable for use with left hand or right hand opening doors.

I bought two of these. I had to reverse the Latch Bolt on both to get the correct handedness.

On the first, no matter what I tried - even WD40, the screw would not undo. It now has a stripped screw head, and is still absolutely tight, so is utterly useless. I regret I was not the happiest of DIY-ers.

On the second, I started by just cutting a small hole in the packaging to expose the screw. It was easy as blinking. The screw undid, the cap came off, I reversed the bolt, reassembled. No trouble whatsoever. The first must have had an over-zealous assembler.

There were very useful paper templates for marking out the cut-outs required in the door frame. Of course, even though the lock assembly appeared identical to the one I was replacing, it was about 2mm taller on the main body that goes inside the door, thus requiring judicious use of my chisel. The striker plate was a completely different shape, and significantly shorter than the one it was replacing.

Getting the bathroom snib bar vertical was no trouble either.

Had both been like the second, it would have had 5 stars.

The only problem was that I had to change the 'hand' the catch closed. As I opened the casing all the interior parts sprung apart and getting it all back and working took some doing. Once the job was done though, the new plate helps improves the appearance of the room

Yale is a quality product. Opened it up to switch lock round and all top quality material inside and well manufactured .